The Easter holiday in Malta brings about a time of bustling, rituals and festive moods.

While Easter-time is the indication of the beginning of spring to the people of Malta, most of the celebrations are of a religious nature occurring in churches across the island. With countless festivals, processions, passion plays, marches, and various other celebrations, Easter week in Malta is notably more commemorated than Christmas. 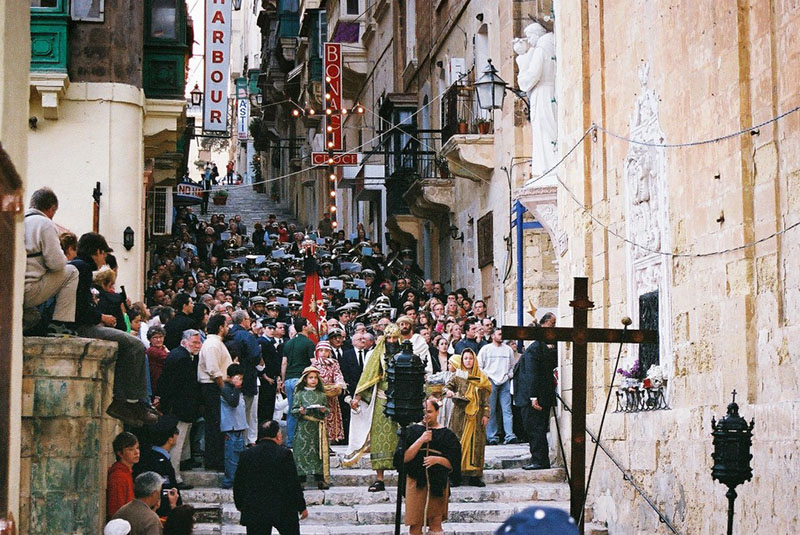 Like other nations similar in cultures, Malta officially celebrates Easter beginning on Palm Sunday. However, Malta does not observe Easter Monday as a national holiday like other comparable nations.

Although the official Easter period begins on Palm Sunday, Malta’s festivities pick up during the Holy Week that concludes with the Easter Triduum – Maundy Thursday, Good Friday, and Easter Sunday. The commemorations begin on the Friday prior to Good Friday, with the practice of carrying the statue of Our Lady of Sorrows through the village streets. If you are interested in seeing this procession first hand, Valletta is an excellent place to witness the historic demonstration. Being the most popular, penitents in the procession have heavy chains fastened to their ankles or walk barefoot in observation of the holiday.

The Holy Week carries through from the procession of Our Lady of Sorrows to the final celebrations on Easter Sunday.

Maundy Thursday is the day prior to Good Friday and is a remembrance of The Last Supper. This day begins a period of mourning for the devotees of the Malta parishes. Churches create model scale representations of The Last Supper and the Easter story and Altars of Repose. Altars of Repose are decorated with white flowers. Afterwards, it is customary to distribute the food used in the replications among the poor of the village. The most prevalent places to visit one of these stunningly decorated altars would be one of the Three Cities: Vittoriosa, Cospicua and Senglea. Some traditionalist churches desist in the ringing of the bells on Maundy Thursday and replace them with a wooden gong called a Ċuqqlajta.

On Maundy Thursday, people participate in a tradition entitled The Seven Visits, which entails visiting The Altars of Repose in seven different churches. During these visits, Christians kneel beside the tomb of Christ in reflection and prayer. The journey between these Seven Visits has been meticulously planned out nowadays, being led by a sizeable cross together with two lanterns and a mobile audio system resounding prayers for the townspeople to hear.

For those in the church, Maundy Thursday is referred to as Holy Thursday or Mass of the Chrism. During a ceremony at the St. John’s Cathedral in Valletta, the Archbishop blesses the Holy Oils. A large majority of the priests on the island take part in the Mass, renewing their vows to Christ. The celebration of the Eucharist takes place in most churches. This is a ritualistic washing of twelve men’s feet, meant to represent that the priesthood includes service to neglected individuals even when it is humiliating.

Good Friday in Malta is a day of solemn remembrance and atonement. Churches are stripped of their ornamental decorations, with the color red being symbolically splashed around the building to replicate the blood of Christ being spilled. No masses occur on this Holy day, however a special service is held in the afternoon which consists of The Word of God, The Holy Communion, and The Adoration of the Cross. Several processions occur in various parishes throughout Malta in which statues are carried through the villages and towns in a sober fashion, in symbolism of the Passion of the Christ. These statues individually represent an installment of the Passion of the Christ and are carried by bearers who are dressed in costumes depicting Biblical characters. There are approximately ten statues in total and are customarily crafted by local artisans. The statues are no small feat to carry. Each statue can take between six to eight men to bear the weight.

Funeral marches are played by resident bands as the procession files through the town. These processions generally encompass a cast of several hundred people, and are quite lengthy in time. Some of the parades contain horses as well as people. The large scale of these processions have caused them to become quite a tourist attraction, drawing in crowds so large that a public broadcast system has been resorted to. The commentary is played in several languages for all visitors to be able to understand.

The most visited of the processions is located in Zebbug and is known for its extravagance. Here you can see Roman soldiers on horseback or in chariots and participants in large white robes.

Holy Saturday remains a somber time, until approximately eight o’clock in the evening. At this time, devoted followers and tourists alike gather in the squares of the churches to witness a special celebration venerating the Rising of Christ. As the celebration commences, the church begins in darkness, with all the lights turned off. The re-lighting of the church starts slowly with glistening candlelight, amassing into an eruption of light in which every light bulb, chandelier, and candle illuminates the building. The bells toll happily, as a proclamation of Christ’s resurrection. At the exact moment of the resurrection, you can hear the hymn Glorja being sang by the choir, with devotees in the crowd joining in.

Holy Saturday is a popular day for Baptisms to take place, both for converted followers and young children.

Easter Sunday begins with a triumphant morning procession in which the statue of the Resurrected Christ is carried high upon the shoulders of the town’s parishioners. The parading of the statue is quite up tempo, with those carrying the statue actually running through the streets as the crowds applaud. Some onlookers throw paper confetti from balconies and windows. The local bands no longer play the solemn funeral processional music, but instead blast cheerful brass compositions. Children accompany the procession, carrying the figolla with them. A figolla is a traditional Maltese pastry which is almond-filled, covered with icing sugar, and in the shape of a rabbit, a lamb, a fish, or a heart. During the procession, the children hold the figollas up as the statue of the Risen Christ goes past in order to have it blessed. Children are also given gifts of chocolate Easter eggs throughout the day.

In Malta, you will find that all holidays have a coordinating sweet or particular food that is generally only consumed during that time period. The Easter holidays bring some very unique foods with them, such as Kusksu, a traditional fava bean soup. Qaghaq ta’ l-Appostli is another extremely popular food. Also known as Apostles’ bread rings, these are a distinctive type of bread that is sold on Maundy Thursday and Good Friday. Kwarezimal is an extremely popular sweet during this time period. This is a small cake made up of black honey, various spices, milk, honey, and almonds.

On Easter Sunday, lunch is the most important time meal of the day. Unlike other countries that focus on Easter supper, the Maltese focus on the lunch period of the holiday. The entire family gathers to eat and drink together and exchange small Easter gifts, such as small chocolate eggs. The Easter lunch usually consists of lamb, potatoes, and vegetables. A slice of figolla follows the meal as a dessert.

Malta has been gathering popularity over the years as a prevalent Easter vacation destination. Along with the widely spread Easter processionals, Malta has warmer weather than its’ European counterparts during this season. The Easter season brings considerably less rainfall than previous months, and the daytime temperatures begin to rise again. While evenings are still slightly chilly, sunny days bring a feeling of early summer and tourists can be seen sunbathing quite frequently throughout the season. While the ocean is still too cool for a swim, the hotel’s pools are often occupied during the brighter hours of the day. Temperatures reach 18 degrees Celsius or 65 degrees Fahrenheit during the days, with seven and a half hours of full sunshine. Malta, on average, receives 330 days of sunshine a year.

While Easter Monday is not a national holiday in Malta, Good Friday brings the close of business across the nation. On top of the businesses being closed, traffic is diverted from the town centres in order to make way for the parades.

Whether you are religious or not, Easter in Malta is a beautiful sight to see. With its’ precessions, decorations, and ceremonies, a Maltese Easter is rich in history, traditions, and emotions. Easter makes for a great time to observe the culture of the Maltese, as well as the faith and devotion of the local Christian parishioners. As well as being a cultural smorgasbord, the weather is warm, inviting, and docile, making Malta a desired choice for vacationing. This collaboration of good food and sweets, local traditions, and inviting weather made Malta one of the top ten destinations to escape a seemingly endless European chill and experience the true joy of the Easter season.